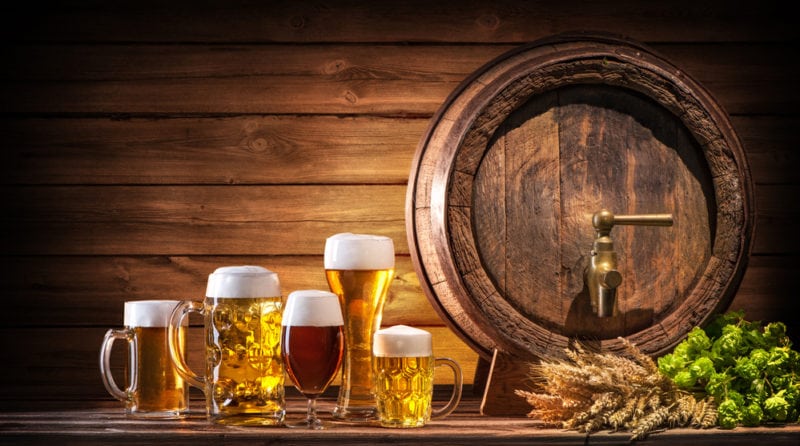 Oakham Ales is calculating the costs of continued growth, weighing the additional income from extra sales against a loss of progressive beer duty benefit.

In the end it was no contest. According to co-owner John Bryan, while profit margins will be cut, Oakham’s production will cross the 30,000 hectolitre threshold early in 2014 with expectations of reaching 36,000hl by the end of the year.

Crossing the PBD threshold comes at a cost. Bryan estimated that Oakham will pay an additional £10,000 a month in duty once it changes its declaration.

Oakham’s brewery in Peterborough, which commenced production in 2006, has a capacity of 40,000 barrels (65,500hl). Its excess capacity is why the brewery’s management is pushing ahead as hard as it can.

“We were a bit guilty when we opened this place up at the end of 2006 not having our game plan together,” explained Bryan. “And then we went into an economic downturn and, to be honest, it’s a wonder we’re still here because we haven’t had any help from the banks as far as investment goes. We’re still sort of fighting our way through that one and we’ve had to stick our hands in our own pockets.

“We’re all fairly happy with that but it’s been a rough old ride, to be fair. It could have been a bloody sight easier. I’m just glad we’ve got to this position now and things are looking a bit rosier for the future, thank God.”

A recent surge in beer sales is a source for optimism. Volumes for the year to the end of October are up 27.5% over the same ten months in 2012. Hoped-for contracts with supermarkets for own label beers are anticipated to boost volumes further in 2014.

Oakham’s beer portfolio is performing well. Its five core beers are headed by Jeffrey Hudson Bitter, which came to national attention in 2001 having been named CAMRA’s Supreme Champion. In the early days HB accounted for up to 60% of Oakham’s production. Now the split is much more even: JHB still leads but with around 30% of volume; Bishops Farewell ranks second at 20-22% of production. Two others of the five core brands are between 12-15%; the fifth is at 7%. (The remainder is accounted for by seasonals and one-offs.)

And a possible addition to the core brands is 6.0% abv Green Devil IPA, which has won a slew of accolades of late. Chief amongst these was being named Champion Cask Ale in the 2013 International Brewing Awards.

“To be honest, it’s my highest achievement, I think, that award,” said Bryan. “It was the hardest fought and you really are up against the best of the best there. And it’s also judged by proper industry people rather than, you know, your average CAMRA kind-of festival where you might get a couple of muppets in from the local pub.”

Green Devil is currently packaged in 660ml bottles, to ensure that purchasers receive a full pint when pouring out the bottled-conditioned beer. Following a lengthy internal debate, Green Devil is to be shifted into 500ml bottles and will no longer be bottle-conditioned. The decision has been muddied by a need to find a new contract bottler. Oakham’s current bottler has given notice, intending to wind down its contract packaging business.

Hoped-for supermarket successes aside, generally bottled beers are a growth area for Oakham. Last year volumes were up 123% on the previous year; this year will better that result. There’s no intention to add a bottling line – aside from the capital cost, Bryan noted the old adage that you don’t become a brewery with a bottling line; you become a bottling line with a brewery attached. He added, “I would rather just tanker it out and let somebody else take on the headache.”

Keg beers will be a new initiative for the coming year. Here Green Devil also factors, with interest in the IPA from bars in Scotland as well as further afield in Italy, Sweden and the United States. Bryan said that for the UK it would look to Close Brewery Rentals for its just launched Craft EKeg service. For export markets it will use one-way kegs, with discussions well underway with Ecokeg.

Notes: Oakham Ales has joined Cask Marque as a corporate member, along with Lancaster Brewery. The two additions brings to 41 the number of brewers and major pub groups supporting the dispense quality initiative.